Few people know the story of Claudette Colvin: When she was 15, she refused to move to the back of the bus and give up her seat to a white person — nine months before Rosa Parks did the very same thing.

Most people know about Parks and the Montgomery, Ala., bus boycott that began in 1955, but few know that there were a number of women who refused to give up their seats on the same bus system. Most of the women were quietly fined, and no one heard much more. 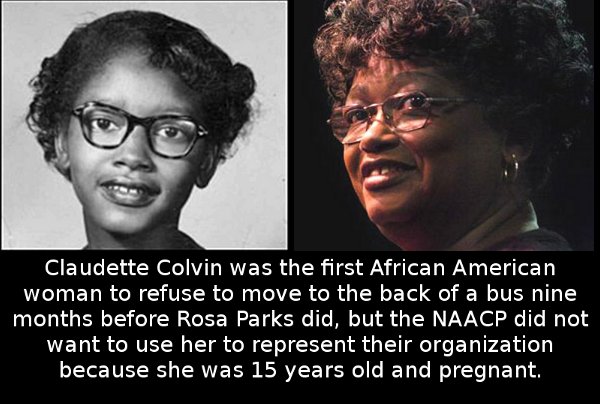 Colvin was the first to really challenge the law.

Now a 69-year-old retiree, Colvin lives in the Bronx. She remembers taking the bus home from high school on March 2, 1955, as clear as if it were yesterday.

The bus driver ordered her to get up and she refused, saying she’d paid her fare and it was her constitutional right. Two police officers put her in handcuffs and arrested her. Her school books went flying off her lap.

“All I remember is that I was not going to walk off the bus voluntarily,” Colvin says.

It was Negro history month, and at her segregated school they had been studying black leaders like Harriet Tubman, the runaway slave who led more than 70 slaves to freedom through the network of safe houses known as the Underground Railroad. They were also studying about Sojourner Truth, a former slave who became an abolitionist and women’s rights activist. 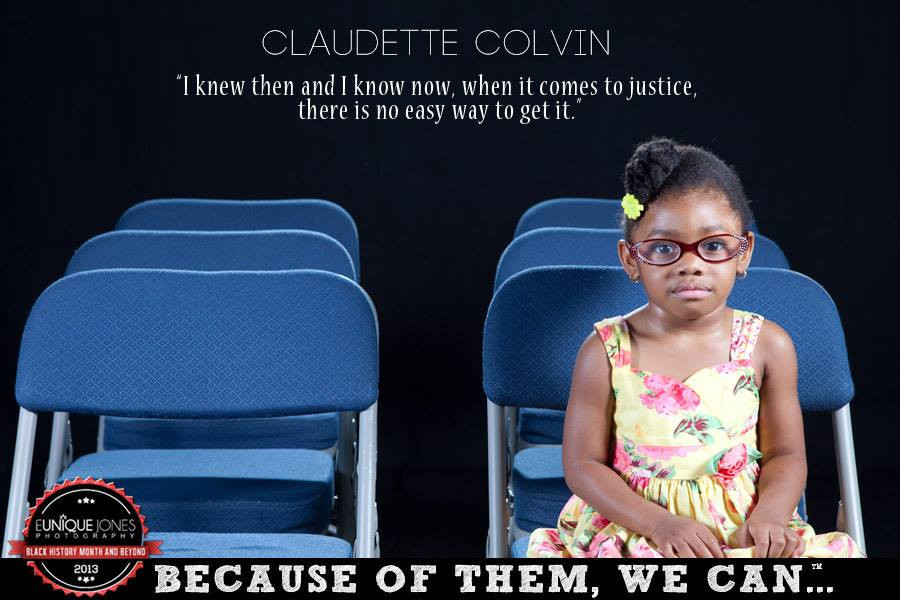 The class had also been talking about the injustices they were experiencing daily under the Jim Crow segregation laws, like not being able to eat at a lunch counter.

“We couldn’t try on clothes,” Colvin says. “You had to take a brown paper bag and draw a diagram of your foot … and take it to the store. Can you imagine all of that in my mind? My head was just too full of black history, you know, the oppression that we went through. It felt like Sojourner Truth was on one side pushing me down, and Harriet Tubman was on the other side of me pushing me down. I couldn’t get up.”

Colvin also remembers the moment the jail door closed. It was just like a Western movie, she says.

“And then I got scared, and panic come over me, and I started crying. Then I started saying the Lord’s Prayer,” she says.

Now her story is the subject of a new book, Claudette Colvin: Twice Toward Justice.

Author Phil Hoose says that despite a few articles about her in the Birmingham press and in USA Today, and brief mentions in some books about the civil rights movement, most people don’t know about the role Colvin played in the bus boycotts.

Hoose couldn’t get over that there was this teenager, nine months before Rosa Parks, “in the same city, in the same bus system, with very tough consequences, hauled off the bus, handcuffed, jailed and nobody really knew about it.”

He also believes Colvin is important because she challenged the law in court, one of four women plaintiffs in Browder v. Gayle, the court case that successfully overturned bus segregation laws in Montgomery and Alabama.

There are many reasons why Claudette Colvin has been pretty much forgotten. She hardly ever told her story when she moved to New York City. In her new community, hardly anyone was talking about integration; instead, most people were talking about black enterprises, black power and Malcolm X.

When asked why she is little known and why everyone thinks only of Rosa Parks, Colvin says the NAACP and all the other black organizations felt Parks would be a good icon because “she was an adult. They didn’t think teenagers would be reliable.”

“Her skin texture was the kind that people associate with the middle class,” says Colvin. “She fit that profile.”

David Garrow, a historian and the author of Bearing the Cross: Martin Luther King Jr. and the Southern Christian Leadership Conference, says people may think that Parks’ action was spontaneous, but black civic leaders had been thinking about what to do about the Montgomery buses for years.

After Colvin’s arrest, she found herself shunned by parts of her community. She experienced various difficulties and became pregnant. Civil rights leaders felt she was an inappropriate symbol for a test case.

Parks was the secretary of the NACCP. She was well-known and respected and, says Garrow, Parks had a “natural gravitas” and was an “inherently impressive person.”

At the same time, Garrow believes attention to Colvin is a healthy corrective, because “the real reality of the movement was often young people and often more than 50 percent women.” The images you most often see are men in suits.

Hoose says he believes Colvin understands the pragmatism that pushed Parks to the fore, but “on the other hand, she did it.”

Hoose says the stories of Parks and the Rev. Martin Luther King Jr. are wonderful, but those are the stories of people in their 30s and 40s. Colvin was 15. Hoose feels his book will bring a fresh teen’s perspective to the struggle to end segregation.