The Creation of God "I used this particular image [of Michelangelo's 'The Creation of Adam'] to deconstruct the old traditional way of thought. Why not take that same image and replace it with the least represented, which is the black woman?" "The original concept here is Michelangelo created the hidden message of a brain but in replacing God here as a black woman, you see a womb. So it shows strength and empowerment and that we are more valuable than we think."
The Virgin "So this is after, of course, the Virgin Mary. But it has a whole different meaning of being a single mother. I made her young and she's not as serene because right now she has to grow up. It's hard work, but it's all about passing along the knowledge. It's about raising another queen."
Birth of Oshun "Here is [my take on] the painting 'The Birth of Venus.' I wanted to show how we are more similar than we are not. [Greek mythology] is very similar to the religion Santaria. The goddesses and Orishas are very similar. You have Oshun which is Venus. Traditionally, we see Venus as this beautiful woman with flowy hair. My hair never flowed, so I'm wondering why this is supposed to be a painting of the most beautiful woman in the world? So I changed her up and I made her have vitiligo because imperfections are beautiful. "In Santaria, when you pray to an Orisha, you give them an offering. And her offering happens to be gold so that's why I made her vitiligo gold." "[At right] is Yemaya. She's the goddess of motherhood, nurturing and love. Oyá [in red] is the goddess that rules over death. Then you have Obatalá who is the equivalent to Jesus, and is a hermaphrodite. Obatalá is the son/daughter of Olodumare, which is God."
The Virgin/Lioness "This was actually the first one I did in the collection. It's owning your power, your independence, your strength as being a woman. She's an albino, so she's still a black woman. This is a hunting picture, so you have a lion being hunted. Men consider themselves lions, when in actuality the lioness is the breadwinner of the family. So it's about recognizing that and owning that." 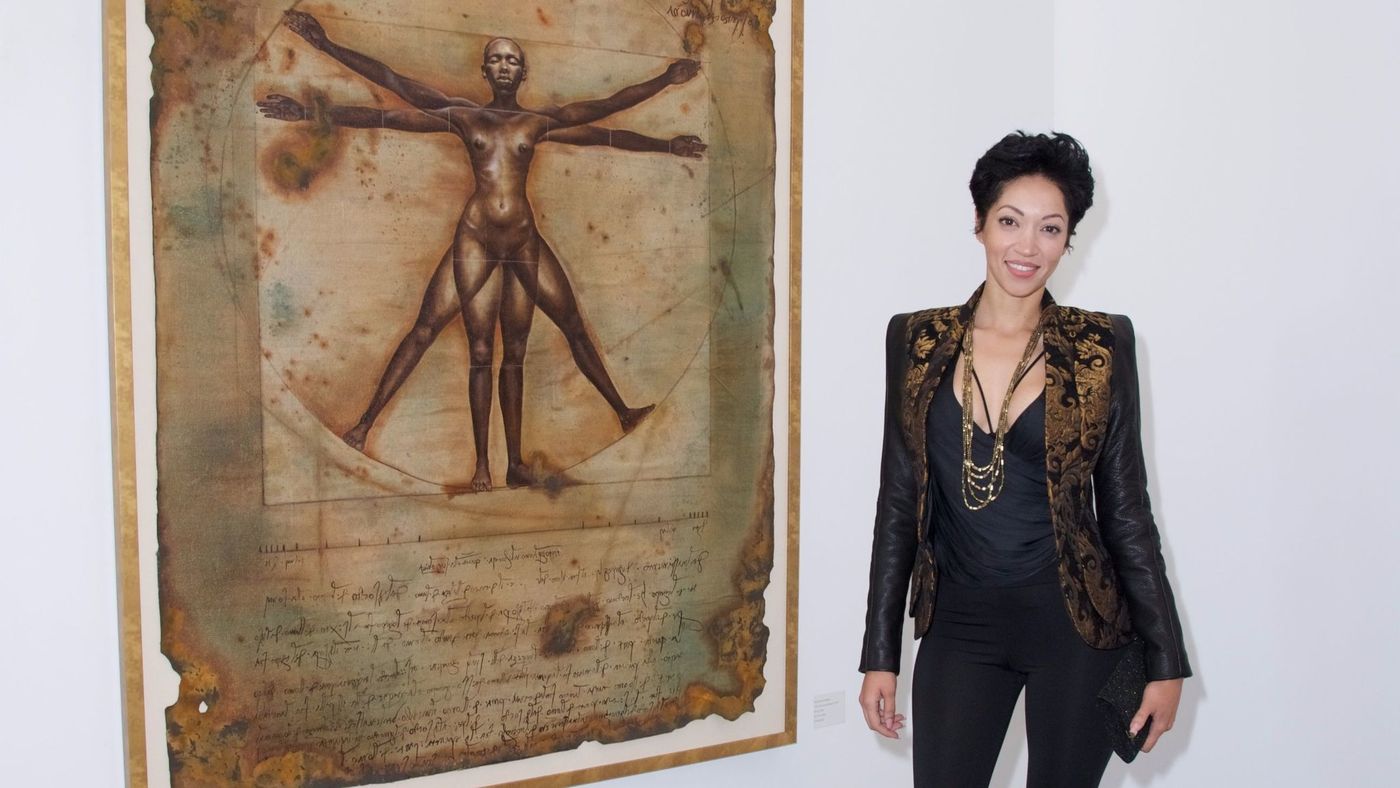 I believe in creating artwork with meaning–meaning with impact, moving people to see the world differently and to be guided by that new vision.  Based in Chicago, my inspiration arises from living life as a woman of color. My art is born out of a combination of my love for history, thirst for endless new knowledge, and dedication to social action.  In refining my work, I have been able to shape a unique perspective built on the foundation of an appreciation of traditional expression and form, with structure and story that creates a bold new contemporary counter narrative–on the elements of the story, as well as the elements of the process of storytelling.  Art is my weapon in the ongoing battle against indifference and inaction.  It forms the basis of resistance. (harmoniarosales.com)

We have been taught that God created ‘man’ in his own image. In fact, we have created God in our own image,” Rosales said of her work’s title.

So ‘God’ is whoever we want God to be, a representation of the ideal, of the divine, of wisdom and love and pure creativity.

This included works such as Michelangelo’s “The Creation of Adam,” a piece painted on the ceiling of the Sistine Chapel that thousands of people visit each year. Rosales credits early exposure to famous paintings such as the Creation “helped to define” her understanding of the world.

“It was only later when I realized that the frame that was set by the masters excluded so much more than it included,” she added. “What was included was a Eurocentric view of the world, and in this case, the heavens. What was excluded was all the rest of us.” (read more)