my good friend and {amazing} artist, fahamu pecou, wrote a piece on kayne that opened my perspective some on kayne. i think it’s a worthy read and i’d be interested to hear your thoughts.

Oh Yeezy! Your shining brilliance is blinding. Too much so for even those venetian-blind inspired sunglasses you once brought back into the realm of pop culture. With each public display of your thoughtfulness you somehow manage to alienate, frustrate, or otherwise infuriate the masses of people.

My eyes however have adjusted to the light. My pin-hole camera, aimed at your pop culture eclipsing form, has provided me with a unique perspective. Like the saying goes: in the land of the blind, the man with one eye is the king.

So to all the haters, old and new, I’ma let you finish, but know that in light of Yeezy’s recent Confederate flag fracas he has proven to really be one of the greatest tricksters of all times.

You’re probably thinking I sipped the Kool-Aid[1] too, right? But allow me to explain by asking you a simple question:

How does a symbol work?

In 1966, Peter Berger and Thomas Luckmann wrote The Social Construction of Reality. It was and still is a landmark sociological work. The book examines how society is both created and how we are created through it. They basically argue that reality is socially constructed[2], that people create signs and symbols as a means of communicating certain concepts. These concepts eventually become common knowledge when repeatedly referenced by the participants within a common cultural experience. The longer a symbol is referenced, used, understood – the more common it becomes, until the symbol becomes in and of itself, an institution.

What does this have to do with Kanye?

It should not surprise anyone at this point for me to say that ‘Ye’s entire program is built upon subverting structures of power. As an artist, his work consistently disrupts “reality”. His earlier work charged that labels, their execs and others in the industry shitted on him- failing to see beyond the confines of their (or society’s) idea of what a rapper could be. Considered arrogant by many, he explained that his arrogance in the face of such rejection was warranted.

Last year shoppin’ my demo, I was tryin’ to shine
Every motherfucker told me that I couldn’t rhyme
Now I could let these dream killers kill my self-esteem
Or use my arrogance as the steam to power my dreams[3]

In subsequent years, he has used his creativity through music, fashion design, production design, and even the founding of a multi-media lifestyle agency[4] to dispel the notion that a rapper expanding his brand could only mean a line of t-shirts[5]! 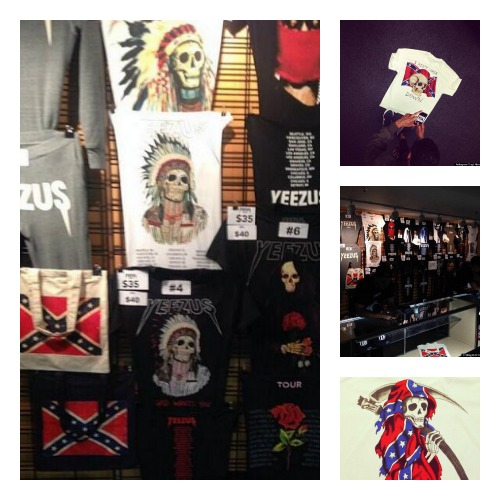 The latest KAN(ye)troversy positions him squarely within a larger debate that is part sociology, part psychology and a whole lot of cojones. This debate centers on his decision to claim the symbol of the Confederate flag as his own. Like appropriating Jesus in to Yeezus[6], Kanye is confronting cultural symbols head on. These confrontations have inspired a great deal of backlash due to people’s emotional, historical, and social connections with said symbols. The backlash is also fueled by Kanye’s tenuous relationship with various publics. Over time he has become the celebrity many simply love to hate. He is the proverbial train-wreck; we cringe when we see/hear him, but we just can’t turn away.

But what weight does the confederate flag have – with its troubling history of racism, lynchings, the KKK and secession among other things – on the body of this black, multi-millionaire, rap star, asshole? Does its history of instilling fear in black Americans or shame in white Americans hold up? Does it become something else all together different? Or does it continue to mean anything at all?

What’s most frustrating is the argument by many that once again Yeezy has done something crazy, or ignorant by adopting the symbol. Those people seem to think that the symbol- a red banner, featuring a blue X punctuated with white stars- actually means something on its own. The outrage is amusing. I guess it’s ok for people of other nationalities worldwide to sing in chorus “Niggas in Paris” (nigga being a symbol/term used colloquially amongst black Americans), but not for a black American to co-opt a so-called symbol of white, southern pride. What’s even more compelling is some of his greatest detractors are, like him, black people.  Eerily silent about his use of racial and gender slurs, when the brother dons a Confederate flag all hell breaks loose. These same detractors might defend his (or their own) right to appropriate “nigga” or “bitch” but not a flag – now who’s crazy?

The simple truth is we’ve simply been taught ways of seeing that have little to do with what we are actually seeing and more to do with what we claim to know or understand. In John Berger’s Ways of Seeing he states; “The relation between what we see and what we know is never settled. Each evening we see the sun set. We know that the earth is turning away from it. Yet the knowledge, the explanation, never quite fits the sight[7].” Kanye West’s many interventions with popular culture upholds this. By subverting certain cultural symbols he begins to disrupt not only what we see, but how we come to understand what we are looking at.

In terms of symbols, especially those loaded with traumatic histories like the Confederate flag, the assumption that those symbols themselves do harm is a problematic one. While we yell and throw stones at the symbols, the actors who perpetuate the actual dangers, violence, and inequities behind them slip away like shadows into the night. But like an errant Toto, Kanye’s on a mission to pull back the curtain on the bumbling wizards who control our realities. His clever disruptions of the normal and socially acceptable are really quite refreshing. They keep us talking (but perhaps we should marry that with a bit more thinking). In the end I hope we don’t get so caught up in pearl clutching and the throwing of disparaging looks that we lose sight of exactly where we’re being led as Yeezus walks.

[1] A reference to the notorious Jonestown mass-suicide. In November 1978, 913 members of a cult led by Jim Jones poisoned themselves by drinking grape flavored kool—aid laced with potassium cyanide.

[4] Kanye West’s DONDA Agency (named after his late mother) is a consortium of creative thinkers, artists, and producers from various fields. The agency is comprised of over 22 divisions with a “goal to simplify and aesthetically improve everything we see, hear, touch, taste and feel.” 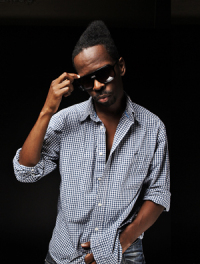 Fahamu Pecou (b. 1975) is an American painter, performance artist and scholar based in Atlanta, Georgia. His artistic and scholarly works comment on contemporary and hip-hop culture while subverting it to include his ideas on fine art.