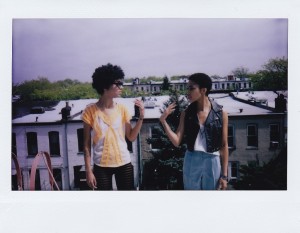 Immediately after their serendipitous meeting at Berklee College of Music in Boston, the duo began to create together harmoniously. Working as subway performers, they moved to Brooklyn and immediately contributed a distinctive string arrangement on “Don’t Kill My Vibe” for Kendrick Lamar’s Grammy nominated album Good Kid m.a.a.d. City (Interscope). By 2013, CHARGAUX created enough buzz during SXSW to garner the attention of GLEE star Darren Criss, opening for him throughout his sold-out “Listen Up” North American tour. Their most recent musical contributions are to Schoolboy Q’s first major label album Oxymoron (Interscope), which debuted at #1 on the Billboard charts, and to Tame Impala and Kendrick Lamar’s collaborative single “Backwards” for the feature film Divergent soundtrack. (Lionsgate, Interscope).

CHARGAUX previously released the Gallerina Suites, a soulful take on classical composition. Their anticipated EP, Broke & Baroque, is scheduled for release in late 2014; for the first time, they will feature vocals and guest collaborations with other New York and LA based artists.