de Gournay was founded in 1986 by Claud Cecil Gurney in the same way many companies are born – to fulfill a need. After searching for artisans to restore the antique wallpaper in his own home, he discovered that this traditional art was on the verge of disappearing and made it his mission to resurrect it. Traveling to China, he searched out artists whose families had generations of experience and shared the passion for continuing these ancient techniques. 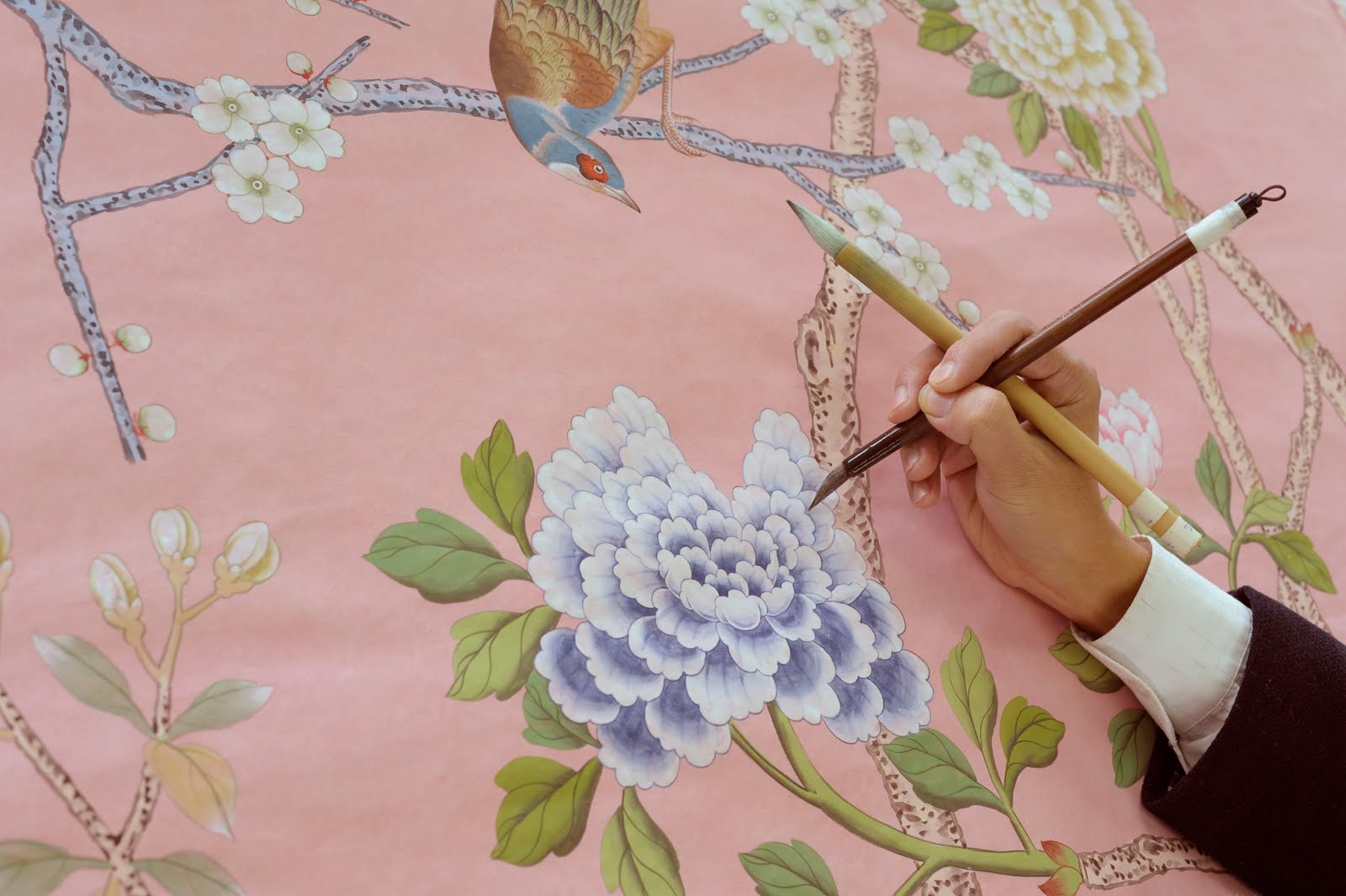 If you try to research the history of wallpaper, you’ll find a disturbingly Euro-centric spin on the facts. Wallpaper, it is repeated in a majority of books and wiki pages, began in Europe in the 17th century as the poor man’s tapestry. It’s telling that there’s a bias, if not an outright blind spot, in the West’s narrative of the craft. The economically dominant forces of Europe misused, co-opted and diluted the cultures that they colonized, and wallpaper was no exception.

The fact, however, is that Chinese wallpaper came first. Formed during a groundbreaking surge of innovation and artistry, Chinese wallpapers from the 14th century represent not only the brilliance of the inventors and artists doing the work, but of the culture which made such advances possible.

The Chinese used art as a scientific, spiritual and philosophical practice. They documented the local world around them with the precision of naturalists, working from observations of living flora and fauna, often in the wild (as opposed to later European traditions, which used taxidermied specimens as models). The wallpapers were an encyclopedia come to life on their walls, a kind of IMAX theater of their local environment projected in their homes. 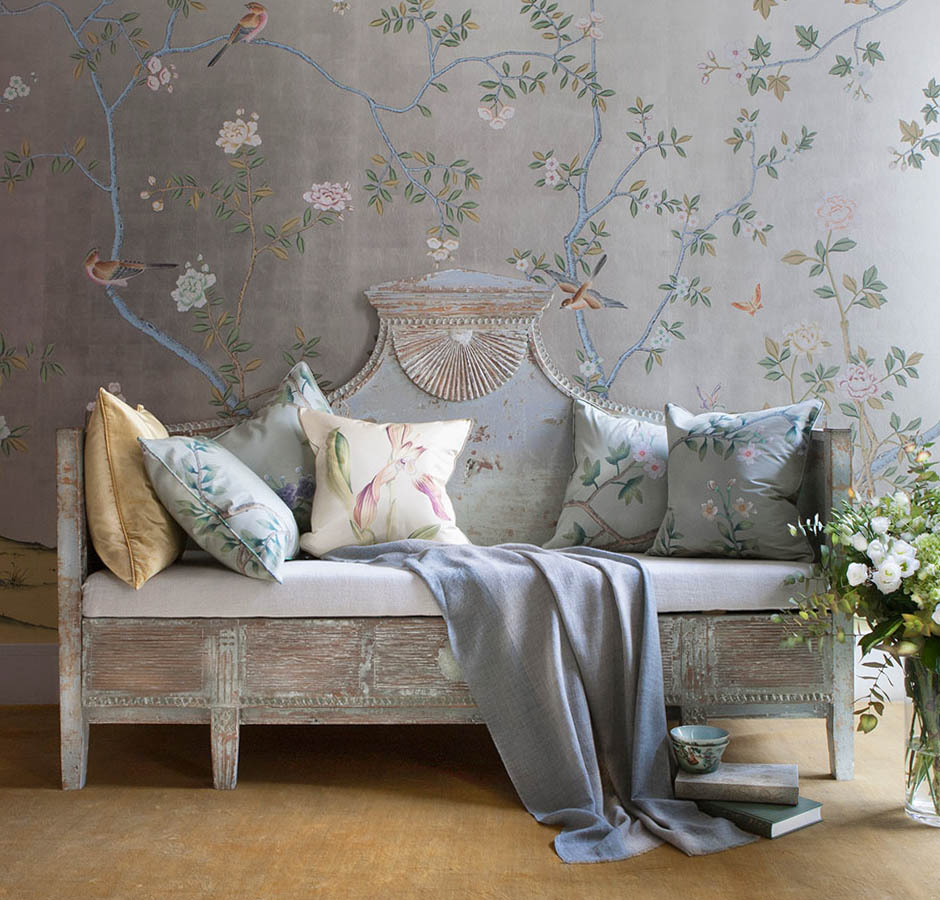 The Chinese believed in Spirit Resonance, the ability of the artists, through intense attention to and affection for their subject matter, to imbue their work with an inherent spiritual power. The space was thus transformed through these papers into an embodiment of the divine in nature.

And, finally, the subject matter in the wallpapers was a commentary on the virtues of a productive, peaceful, healthy society, featuring everything from panoramas of a thriving wildlife (with birds often shown in pairs, representing love and reproduction), to vignettes with figures busy at work creating the very crafts, like ceramics, that generated dignity and joy in people. The walls thus became an inspirational, communal self-portrait of the best aspects of society.

By the time Chinese wallpapers made it to the West, however, they were just another luxury import to keep out the cold and decorate the walls with a new fad: chinoiserie. Lost on the Europeans was the intention, meaning and power. The connection between the inner, domestic world, and the outer, political and environmental worlds, was gone.

De Gournay is changing that. By going back to the artisans in China not just for the product but for the process, the company is at least acknowledging, and perhaps even rehabilitating, the intensity of the art form. For a modern era where everything is considered “wallpaper” —where the world is a mere background to our narcissistic self-absorption, and material goods are just props for our insatiable lifestyles—de Gournay comes as a subversive shock to the senses, pushing our surroundings unapologetically into the foreground. 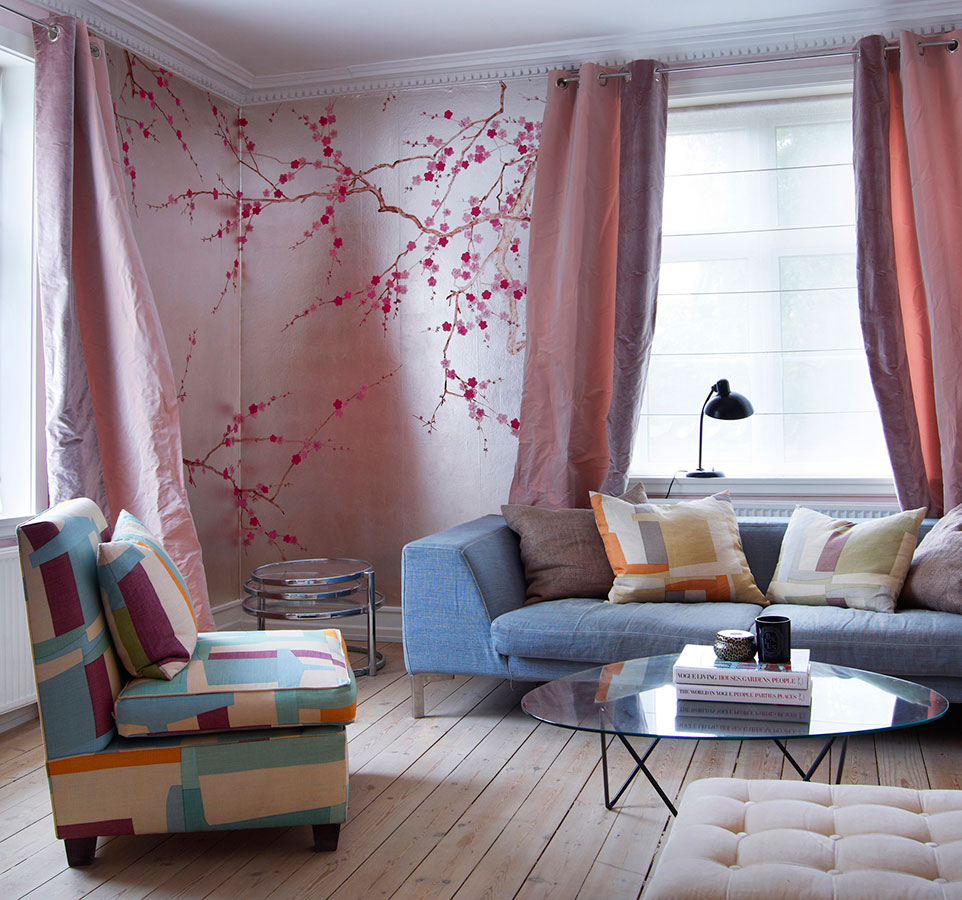 This effect is achieved through a layering process. The paper itself is layers of different materials: either paper or silk as the paintable surface, then muslin as a middle substrate, and finally canvas as the final backing. The paints, too, are many layers of transparent watercolors—no opaque pigments are used in Chinese wallpaper. And finally, the outlines are fine lines of ink, in some areas “threaded” or repeated so close together as to create the effect of volume but without creating a solid block of ink. (Also, pure black or white ink is never used, as these are not natural colors.) The accumulation of layers allows for two things: dimension and resonance. Dimension is created through gradations of light. That’s how our eyes operate when they see “color,” which is just light playing on our retinas in grades of color waves. Resonance is achieved through the interplay of complimentary colors whose impact on each other makes the images seem to vibrate, or come to life, in the closest and most naturalistic approximation to actually being in nature.

We are not used to having to collaborate with our environment. De Gournay wallpapers insist on it. You become a part of the setting, and once you accept that you and your environment must share the same visual plane, you begin to enjoy the company—and then, ultimately, to really crave it, because you recognize it as a very primal need: harmony.