In her one-hour talk at 2012’s National Association of Professional Women, Sara highlighted her fascinating journey from launching a start-up with $5000 in savings to becoming the youngest self-made female billionaire in history.  Anyone who’s heard Sara’s story knows it’s exhilarating and motivating, but to see her live brings a new dimension to her story.  She’s fresh, exuberant, funny and completely passionate about helping women feel and look their best, and about reforming all of the misguided trends that have kept in women in painful and ill-fitting undergarments over the last 50 years.

Sara delivers surprise after surprise in her tale of phenomenal entrepreneurial success.  Her non-conventional lessons fly in the face of all the best business school advice we received from the business pundits and gurus.

Here are the top 10 lessons I learned from Sara’s journey from fax machine saleswoman to entrepreneurial superstar:

1)Fail Big – Sara’s beloved father followed Wayne Dyer’s guidance in teaching his children the power of failing big.  Each day, her father would ask – “So, what did you fail at today.” And if there were no failures, Dad would be disappointed.  Focusing on failing big allowed Sara to understand that failure is not an outcome, but involves a lack of trying — not stretching yourself far enough out of your comfort zone and attempting to be more than you were the day before.   Failing big was a good thing.

2)Visualize it – Sara is a big fan of “visualizing” your big goal, in specific, concrete ways.  She saw herself clearly on the Oprah TV show 15 years before it happened.  She simply knew it would happen.  She’d see in her mind’s eye sitting on the couch with Oprah having an exciting conversation, and wondered, “What are we talking about?”  The rest was just “filling in the blanks” to get there.

3)Don’t share your fragile idea with the world too soon. Sara kept her idea of making a fabulous new undergarment for women under wraps for an entire year while working on developing the prototype.  Only after she was 100% committed to it and ready to launch, did she sit her friends down and explain her new direction.  Sara explains that ideas are vulnerable, fragile things.  Wait until you’re completely read to move forward before you share it with people. Meaning well, they’ll shoot it down, offering all the reasons why it won’t work.  But when they do,  you’ll be ready to deal with it. 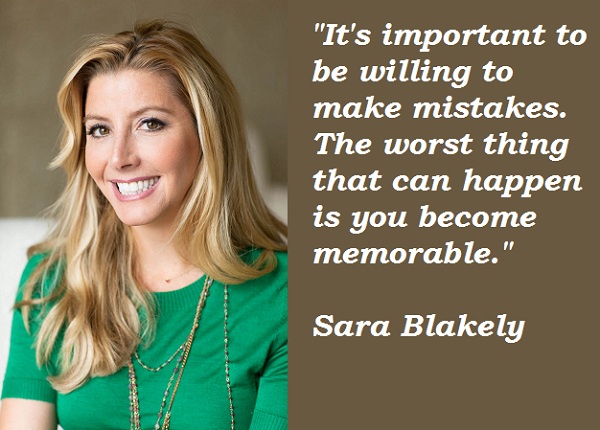 4)Don’t take no for an answer. Sara reached out to slews of manufacturers and lawyers to help her patent her idea and create a successful prototype.  In every conversation she had with potential manufacturers, she was asked three questions: 1) Who are you? 2) Who are you with? 3) and Who is backing you?  When the answers to these three questions remained, “Sara Blakely,” no one wanted to take a chance on her, until one manufacturer called her back and said “OK.”  Why? Because he had gone home and told his daughters about the idea, and they said, “It’s brilliant!”

5)Hire people you like and trust (even if they don’t know a great deal about what you need them to do).  Sara hired a head of Product Development and a PR director who had been friends and supporters from the beginning.  Neither knew anything about the functional areas they were hired to oversee, but Sara trusted they’d be fabulous at their new roles, and they were.

6)You don’t have to go in order. Sara’s passionate commitment to her new Spanx product was so fierce, she just tackled each task in the development and marketing journey as they came up, not necessarily in the best order for a smooth launch.  She landed a Neiman Marcus deal involving placement of the product in seven stores, before figuring out how to mass produce “crotches” for the product. The Oprah show called to do a feature on her in a staff meeting in her “offices” before she had an office or a staff.  She winged it, and it all went well.

7)You CAN figure it out – you have the ability.  Sara knew absolutely nothing about women’s undergarments, patenting a new product, manufacturing, marketing, product development, website development, online commerce, and more.  But that didn’t stop her. She researched what she needed to, hired out what she couldn’t do, and marched forward with undying commitment and energy. Don’t stop yourself from pursuing an idea because you don’t think you have what it takes. 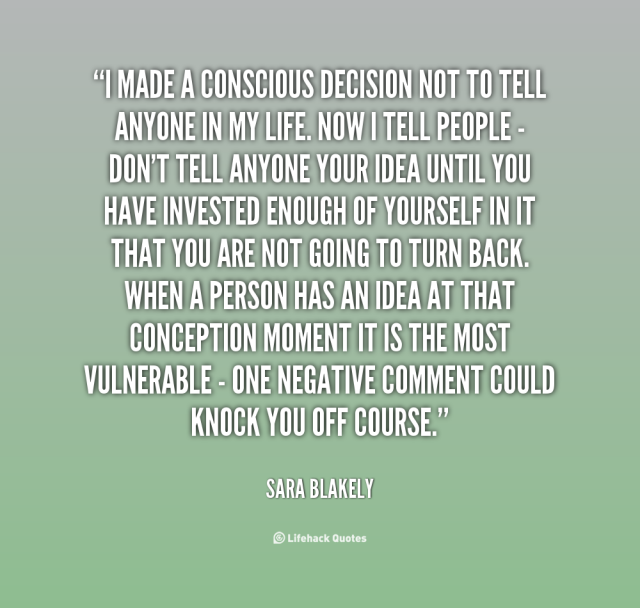 8)You can build a billion dollar business starting with $5,000.  Sara had only $5,000 in savings on that fateful day when she cut the feet off of her stockings in order to wear them under her white pants for a more flattering look (and thus, realized the world needed a new undergarment product that would be comfortable yet flattering to the female form). From that $5,000 she embarked on designing a prototype, securing a manufacturer, naming the product, legally protecting her product, and getting the word out to potential buyers.  You don’t have to be rich to move forward with your fabulous new idea.

9)Don’t worry about the outer “stuff” until the time is right. Sara worked tirelessly from her apartment creating her product, avoiding investing in outside office space or other marketing and business tools until the product had taken off.  She didn’t have a formal website until she made it on the Oprah show and needed one.  Anything that wasn’t essential to building the product and getting the name out there simply wasn’t a priority.

10)Breaking the mold is a good thing.  When Sara began to research undergarments for women and how they’d been made for the last 50 years, she was astonished.  From the absurd sizing protocols (only one average waist measure was used on all the products, regardless of the size of the garment), to how products were tested (on manikins not real people), Sara saw that the undergarment industry needed a female perspective – insights from a real woman wearing these items to shape the product development direction so the products were useful, effective, and as comfortable as possible.  She broke the mold, and developed a completely new approach to developing women’s undergarments.

“Believe in your idea, trust your instincts, and don’t be afraid to fail. It took me two years from the time I had the idea for Spanx until the time I had a product in hand ready to sell into stores. I must have heard the word “no” a thousand times. If you believe in your idea 100%, don’t let anyone stop you! Not being afraid to fail is a key part of the success of Spanx.”

In the end, Sara Blakely’s story shows us what’s possible when we believe, when we’re resourceful beyond measure, and when our passion and commitment to something outside ourselves brings us to a calling.