this story breaks my heart. the increased violence against girls across the globe is absolutely outrageous. how could the government NOT get involved? 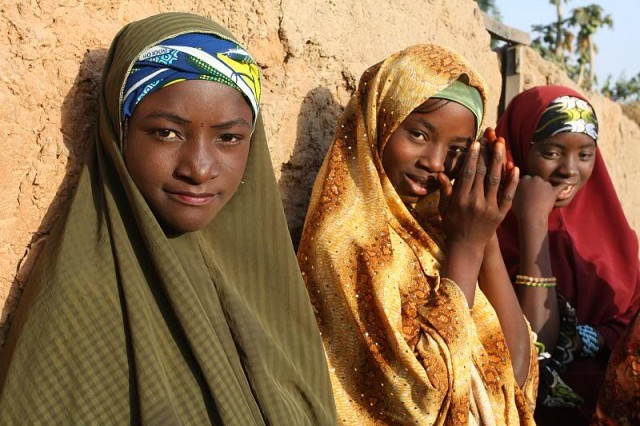 Scores of young girls and women kidnapped from a school in Nigeria are being forced to marry their Boko Haram abductors, a local human rights group has reported.

Halite Aliyu, of the Borno-Yobe People’s Forum, told the Associated Press on Wednesday that more than 200 girls who were kidnapped two weeks ago had been sold to the fighters for $12.

Aliyu said the information given about the mass weddings was coming from villagers in the Sambisa Forest, on Nigeria’s border with Cameroon where Boko Haram was known to have a number of hideouts.

“The latest reports are that they have been taken across the borders, some to Cameroon and Chad,” Aliyu said.

It was not possible to verify the reports.

Community elder Pogu Bitrus of Chibok town, from where the girls were abducted, told the BBC’s Hausa service that some of the kidnapped girls “have been married off to insurgents”.

“A medieval kind of slavery. You go and capture women and then sell them off,” Bitrus said.

At the same time, the Boko Haram network was reportedly negotiating over the students’ fate and demanding an unspecified ransom for their release, a Borno state civic leader told The Associated Press. The abductors have also claimed that two of the girls have died from snake bites.

About 50 of the kidnapped girls managed to escape from the captors in the first days after their abduction, but some 220 remained missing, according to the principal of the Chibok Girls Secondary School, Asabe Kwambura. They are between 16 and 18 years old and had been recalled to the school to write a physics exam.

The government and military’s failure to rescue the girls prompted Nigerian protesters to march on the country’s parliament on Wednesday.

The march, dubbed “A Million-Woman March” was promoted on Twitter and attracted several hundred women and men, mostly dressed in red, carrying placards that read “Find Our Daughters”.

Parents have voiced fury at the military’s rescue operation, accusing the security services of ignoring their daughters’ plight.

She accused the military of having “no coherent search-and-rescue” plan.

“If this happened anywhere else in the world, more than 200 girls kidnapped and no information for more than two weeks, the country would be brought to a standstill,” she told AFP.

The protest underscored how large parts of northeastern Nigeria remained beyond the control of the government.

Until the kidnappings, the air force had been mounting near-daily bombing raids since mid-January on the Sambisa Forest and mountain caves bordering Chad.

Aliyu said that in northeastern Nigeria “life has become nasty, short and brutish.

“We are living in a state of anarchy.”