ARLINGTON, Va. — When Adm. Michelle Howard thought about who to thank first during her speech at a Tuesday ceremony marking her promotion to four-star and her assuming duties as the Navy’s number two officer, the list was long.

But in the end, she settled on Rear Adm. Jonathan Yuen and Navy Exchange executive Rob Bianchi.

“If you don’t believe today was a first, when I called to order four-star shoulder boards for women, they didn’t exist,” Howard said. “A special contract was let, and you folks are seeing the first set in the history of the United States Navy.”

The ceremony, held at the Women in Military Service for America Memorial at Arlington National Cemetery, made Howard the first woman to make four-star admiral. On Tuesday afternoon, she will assume duties as the vice chief of naval operations.

The ceremony was presided over by Navy Secretary Ray Mabus and Chief of Naval Operations Adm. Jonathan Greenert.

Howard thanked her family and her fellow officers in front of a crowd of about 100 for their support over the years. During her speech she reflected on the shared history of the Fourth of July weekend, saying that sailors embody the spirit of independence forged then and thanked sailors for the privilege to lead them.

Mabus said that Howard serves as a role model for his three daughters, but also downplayed the significance of the event somewhat. Mabus said Howard was selected to four-star because she was the best qualified.

“The Navy chose the best officer to be the VCNO, that’s the only thing that happened here today,” Mabus said. 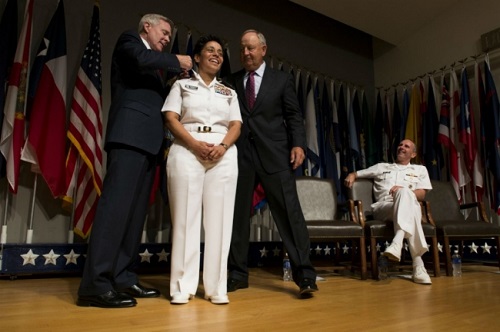 Howard has faced critics who say she was promoted for political reasons rather than merit, a notion that both Mabus and Greenert were quick to dismiss in their remarks.

“Michelle has put in a tremendous career,” Greenert said. “Thirty-two years of mainstream, at-sea, tough tours. Michelle came up through the amphibious expeditionary warfare arena and came into [Washington] and did the hard jobs that needed to be done. And so she is definitely ready to assume this position, there is no question in my mind.”

A 1982 Naval Academy graduate, Howard has achieved many firsts in her career. She was the first black woman to command a ship — the amphibious dock landing ship Rushmore in 1999 — and went on to command Amphibious Squadron 7 and later Expeditionary Strike Group 2.

Howard most recently served as the deputy CNO for operations, plans and strategy. In a phone interview with Navy Times on Monday, she said she’ll be focusing on “culture” issues as VCNO, especially in the areas of cyber and information security in an age of social media and online gaming.

Howard is relieving Adm. Mark Ferguson, who is taking over as commander of Naval Forces Europe-Africa and Allied Joint Forces Command in Naples, Italy.