A severe solar storm reached the Earth on Tuesday, contributing to a display of the aurora with the potential to stretch as far south as Oregon in the US, as well as being visible across unexpected reaches of the southern hemisphere. 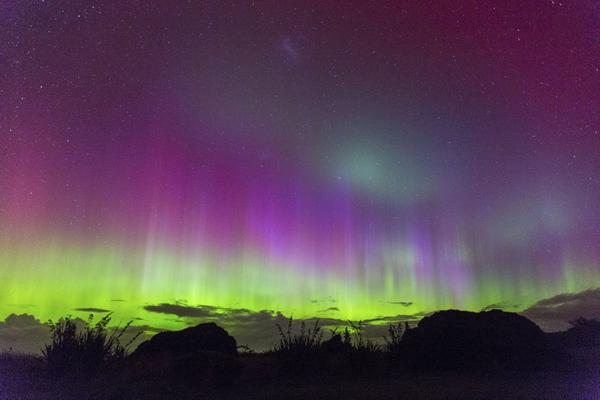 Two blasts of magnetic plasma left the sun on Sunday, eventually combining and arriving on Earth on Tuesday about 15 hours earlier and much stronger than expected, said Thomas Berger, director of the Space Weather Prediction Centre in Boulder, Colorado.

Authorities warned of possible disruption to power grids, GPS tracking and communication systems, but Berger said that in this case there were none of the bursts of radiation that can affect satellite operations.

The storm ranked a 4, called severe, on the National Oceanic and Atmospheric Administration’s scale of 1-5 scale for geomagnetic effects. It is the strongest solar storm to reach Earth since the fall of 2013. It’s been nearly a decade since a level 5 storm, termed extreme, has hit Earth.

Forecasters had thought it would come late Tuesday night into Wednesday morning; instead it arrived just before 10am EDT and “it’s significantly stronger than expected,” Berger said.

The Aurora Borealis or northern lights, usually seen only in the far north, dipped south, with more people reportedly able to enjoy the colorful sky show. Early on Tuesday, before sunrise, auroras were already being seen in the northern tier of the US, such as Washington state, North Dakota, South Dakota, Minnesota and Wisconsin.

Striking images came from Estonia and Alaska, while forecasters said there was the possibility of a sky show in much of Russia and northern Europe, as far south as central Germany and Poland.

In the southern hemisphere, displays were reported from Dunedin, New Zealand, and mainland Australian locations including Perth and Goulburn.