This November, Essence Magazine will feature the Black women who – every single day – help the President of the United States and his wife run the country: the Women of the White House.

The youngest of them is 23-year-old Jordan Metoyer and she is the Assistant to the Deputy Director and Senior Advisor to the Office of Management & Budget Director, while the one with the “exotic” sounding title is Desiree Barnes, 27, because she is the Press Assistant and Senior Wrangler – yes, that’s a real job. 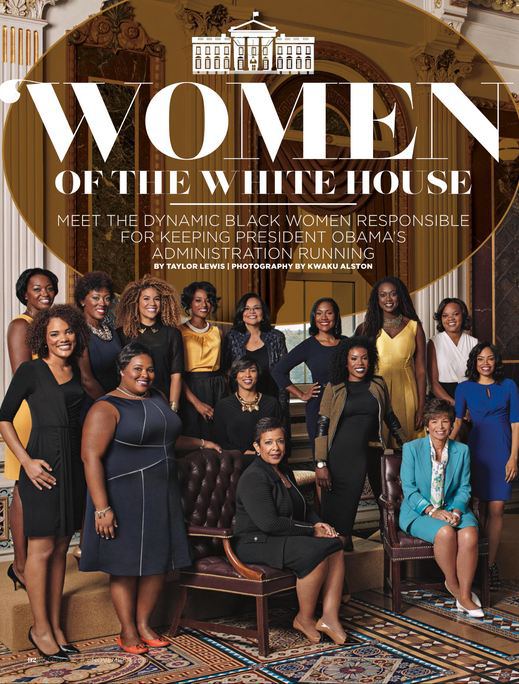 Barnes says that anyone can reach the heights and accomplishments these ladies have made if they just put their mind to it. The former chief counsel to Senator Ted Kennedy is one of the point women for the President’s domestic policy matters and works with key White House officers and federal agencies to shape proposals on topical issues like education, employment, health care and immigration.

“You may not be your college valedictorian, but being present and contributing will earn you a spot on this team,” she says.

As the 29 staffers gather in the Eisenhower Executive Office Building, in preparation for the magazine’s photo shoot, The First Lady’s Special Assistant, Chynna Clayton, 27, says that “the White House is composed of people who are passionate about the country.”

The gathering of the women makes everyone realize that at least one (or even more) of them has had something to do with every economic policy, healthcare issue and even national security agendas that President Obama or First Lady Michelle have had to deal with – a sobering and impressive fact to ponder.

“When women succeed, America succeeds,” says Valerie Jarrett, Senior Advisor to the President. She should know, because apart from being one of the President’s closest friends in the White House, the attorney and ex-real estate developer acts as a go-between with the outside world.

And it looks like the ladies do seem to be happy with the jobs they have chosen to do and the way their careers are heading.

As Adaeze Enekwechi, the Associate Director for Health, Office of Management & Budget, puts it, “Never take a job that doesn’t terrify [you]. Those are the jobs worth doing.”